Ortho One docs head for offices near Easton Oval 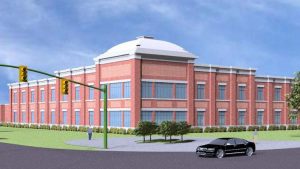 A two-story medical building is planned on Stelzer Road near Easton Oval.

Developer HPlex Solutions and the 19 physicians at Orthopedic One will develop a $13.3 million medical office building on a prominent corner at Easton.

The Stelzer One Medical LLC joint venture will build the two-story, 43,000-square-foot building at Easton Way and Stelzer Road near the Easton Oval office campus. The venture paid $1.9 million for the 3.1-acre tract in March.

Hplex President Denny Freudeman said the Orthopedic One doctors will lease 21,000 square feet on the first floor for five operating rooms. Other prospects have shown interest in a portion of the second floor.

“We have about two-thirds of it pre-leased and are in conversation with a couple of other groups about the balance,” Freudeman said.

The building is scheduled for completion in April 2016.

Medical office development “is moving into more of a consumer health-care model,” Freudeman said. “Convenience (for patients) is very important.”

Orthopedic One division Executive Direct Dale Ingram said the give outpatient surgery rooms join five that the practice’s surgeons have at a Sawmill Road facility. It also will supplement its physicians’ surgeries done at the area hospitals, he said.

“With the dynamics of the health-care market, we felt (the Easton surgical center) was the best course to make sure we control our destiny,” Ingram said.

Orthopedic One isn’t the only medical office deal in the northeast suburbs.

Westerville has approved a tax incentive for HealthSouth Corp.’s planned project in the Westar business park. The 12-year, 65 percent tax abatement approved March 3 will help in construction of a 50-bed rehabilitation hospital at the corner of Polaris Parkway and Cleveland Avenue.