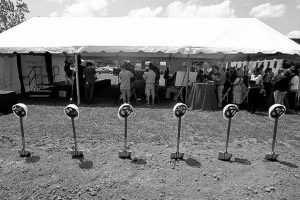 Shovels await the ceremonial dirt-turning by dignitaries at the groundbreaking for a new outpatient care center scheduled to open in Upper Arlington in August 2016.

“It will probably be the most comprehensive health center that we have to date,” said Dan Like, executive director of ambulatory services at OSU Wexner and project manager for the new facility.

About 100 representatives of the medical center, the city of Upper Arlington and construction officials attended the June 23 ceremony.

The five-story, comprehensive care facility is expected to open in August 2016 at 1800 Zollinger Road.

Once completed, the 100,000-square-foot facility will provide primary care, heart and vascular services, women’s health care and women’s health imaging; specialties such as dermatology, endocrinology, rheumatology and digestive health services; and a general surgery clinic and laboratory and X-ray services.

“These services were selected based on looking at the needs of the community and surrounding communities, and really on keeping people well,” Like said.

“Really, our goal is to keep people out of the hospital.”

Medstone LLC finalized negotiations in April to purchase the 5-acre site for the project at Kingsdale from Upper Arlington for approximately $1 million.

The company will own the land and OSU Wexner will operate the facility.

It’s expected to employ 150 to 160 people and generate $465,000 in annual payroll taxes by its fifth year of operations, according to city officials.

“Kingsdale Center was among shopping centers that had lost their luster,” he said. “We were patient because we knew this mixed-use vision could only become a reality if we saved space for the most important component.”

“All of those things and the activities you see around here … all represent a significant step in development,” Leach said. “It couldn’t be with a better partner than our close neighbor physically and in all other respects – Ohio State University.”

“We’re breaking ground on a healthier future,” Retchin said. “This new outpatient care center in Upper Arlington’s Kingsdale Center will be home to convenient health services and collaborative space, all designed to improve the health and well-being of the community.”