Land once sought for Port Columbus International Airport has emerged as a focus for economic development in Gahanna as the city prepares to open an $8.2 million extension of TechCenter Drive in November. 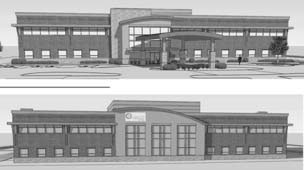 Central Ohio Urology is moving about 15 doctors and 70 employees to offices it will build in Gahanna.

The 114 acres owned by Andre Buckles already have drawn a planned 40,000-square-foot office building and city park, leaving about 80 acres for further commercial development between Interstate 270 and Hamilton Road. Construction of the TechCenter bridge and lanes through the Buckles land will improve access to I-270 for businesses in the Officenter and Central Park developments east of Morrison Road where TechCenter now ends.

“We’ve been on hold until we had access,” said Carl hamman, Buckles’ representative for nearly 20 years. “We’re actively marketing it now that we have the five-lane road done.”

Buckles in the 1990s sold land along the east edge of Morrison Road for the Officenter park, distributation center projects, hotels and restaurants.

Columbus developer Tim Spencer of Trivium Development LLC already has put about 12 acres along the south edge of the development in contact. In early September, Central Ohio Urology Group Inc. revealed plans to consolidate its administrative staff, outpatient surgery operations and other functions at a Class A office property on 2.9 acres.

“They were the reason I started looking at the tract,” Spencer said. “We’ve been persistent.”

The developer has in interest in acquiring more property but has yet to identify retailers or other office tenants. He said he can’t buy all of the land.

“We have some ideas and we’ve talked to a few retailers,” Spencer said. “We have our work cut out for us finding the right user.”

The land attracted outdoors outfitter Bass Pro Shops, but its two-year contract on the property expired about two years ago. The marketer of the property, Continental Realty Ltd. agent Jim Hendrix, said retail development “is still sluggish” but expects the site will attract other commercial development. He called the office project “a real nice start.”

“We don’t have anybody standing in line,” he said. “It will just be a matter of time.”

Port Columbus in 1998 sought to buy the Buckles property through eminent domain. Hamman said the airport valued the land at about $3.5 million, but a jury valued the property at $13.5 million. Soon after the verdict, airport officials abandoned their bid to acquire the land.

“We’re approaching built-out status so we really can’t expand our territory,” he said. “The Buckles tract is going to be one of our primary sources of development in the next few years, along with Central Park.”

The Central Ohio Urology project, he said, offers an example of how office development can continue along I-270.

“The rest is still speculative,” Jones said. “We don’t have anything else in mind yet.”

Hamman said the cooperative spirit the city demonstrated in getting the road built prompted Buckles to donate about 35 acres to the city for the expansion of a park. Buckles has farmed the land for 50 years, Hamman said, and sees no need to sell the property quickly.